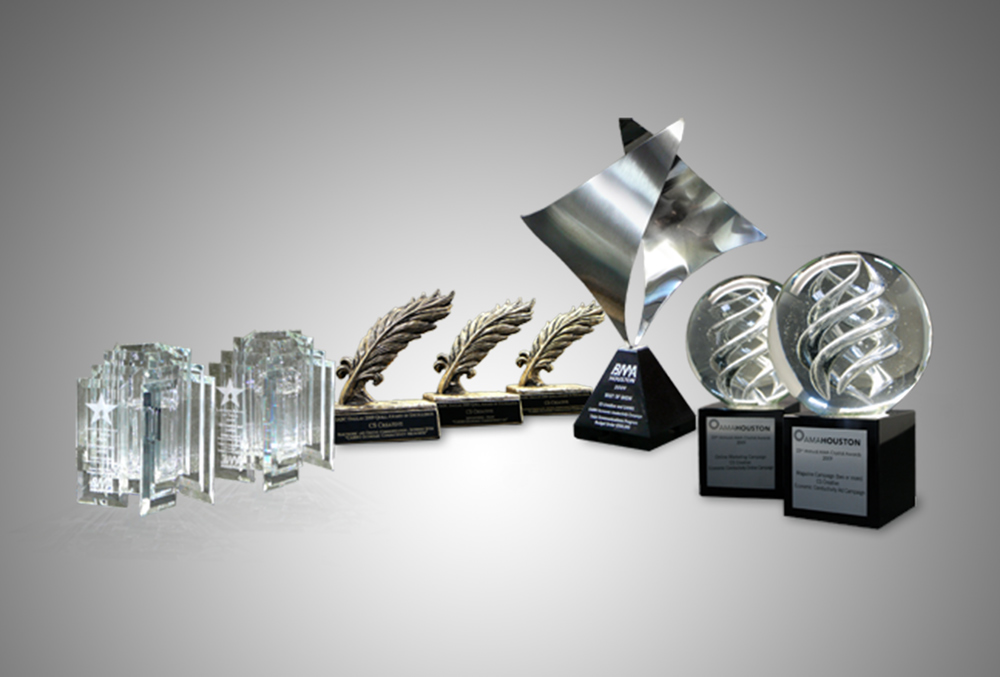 CS Creative is one of ten agencies worldwide to garner the 2010 Business Marketing Association (BMA) B2 Advertising Award for its successful Economic Conductivity Campaign for CARBO.

Awards were given to one recipient in each of 10 super categories; CS Creative took top honors in the B2 Advertising division. CS Creative also took home “Best of Category” awards for Print Ad Campaigns and Microsites under $25k. Approximately 600-900 entries are submitted per year.

Creativity and impressive marketing results were both factors in CS Creative’s selection for the awards. In the quarter after the campaign launched, CARBO, a world leader in oil and gas productivity solutions, saw revenues increase 30 percent and sales volume increase 19 percent. Gary Kolstad, president and CEO of CARBO, said, “These results are a testament to the success of our Economic Conductivity technical marketing effort.”

In addition to the BMA B2 Awards, the Economic Conductivity campaign brought CS Creative eight other top awards from three of the country’s most prestigious marketing and communication associations.

Three Lantern awards came from the Business Marketing Association (BMA) of Houston, a Texas competition created more than two decades ago to bring recognition to top-quality creative work and the rising standards of business-to-business marketing. The firm received top Lantern Awards in the “Total Communications Campaign” and “Ad Campaign” categories.

CS Creative also received top prizes from the Crystal Awards, the American Marketing Association’s (AMA) recognition of those who have exhibited marketing mastery through successful campaigns throughout the past year. The awards were for best “Online Marketing Campaign” and “Magazine Advertising Campaign.”

Finally, CS Creative’s work for CARBO earned three top Quill Awards from the International Association of Business Communicators (IABC) in Dallas, celebrating the achievements of marketing and graphic design communicators. The awards were in the categories of “Advertising,” “Internet Sites” and “Marketing Communications” campaigns.

“This initiative received more recognition than any other campaign we have had the opportunity to produce in our 21 year history,” said Cindy Slayton, President of CS Creative, adding “Of course awards are very exciting, but even more important to us are the dramatic results we achieved for our client.”

The integrated marketing campaign was undertaken to help CARBO promote the term “Economic Conductivity,” which was created to describe the proven advantages of ceramic proppant in increasing the ROI of oil and gas well productivity. The campaign defined the term, educated clients and stakeholders about it and established it as an industry standard, with the objective to create interest and awareness.